What Are Your Fitness Goals for 2019? 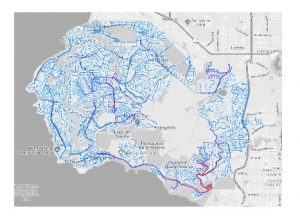 For 2018, my goal was to ride my bicycle on every street in Rancho Palos Verdes (RPV), California, my hometown.
Having cycled all the streets in RPV fairly early in the year, moved on to Palos Verdes Estates, finished those.  In each of these cities, don’t think there was one flat street, it’s all Hills, but what a wonderful workout. Some of the streets were rather challenging, yet, I was able to ride up or down every street.  Didn’t ride both directions unless it was a dead end.  Also rode most of the streets in Rolling Hills Estates.
Have been keeping track of my progress several ways: using technology and two old fashioned maps.  I wear a Garmin Forerunner and use MapMyRide on my iPhone, each of these shows a map of where I have been. The Garmin uploads to Strava where I purchased a an optional yearly plan because it produces a “Heat Map” also showing where I have been.  Marked my cycling progress on the two paper maps of the Palos Verdes Peninsula, marking streets completed with a red Sharpie.
Still have two closed/gated neighborhoods left to ride as well as the entire City of Rolling Hills.   Rolling Hills has a No Cycling law, however I have noticed people cycling there, was told they are likely residents of the City.  My understanding of California Vehicle Code is that all Rules of the Road MUST be the same in the entire state of California, which means cyclists must be allowed access.  My plan is to add those streets this year to reach my goal while avoiding and respecting others and their private driveways.  Some of these streets as well as the streets in the city of Rolling Hills are very steep, very curvy and narrow.  Will likely have someone follow along as I ride for safety sake because some residents in Rolling Hills may not expect to encounter a cyclist.
As a  caregiver for both my parents I’m not able to ride daily.  My father now 97 has macular degeneration and barely able to walk with a walker. He is of sound mind and can ruminate or tends to worry too much. My mother 89, is starting to feel very old.  Recently retired from her volunteer job, she feels the need to stay home to take care of my father.  She may be showing signs of Dementia.  Am doing all I can to help them, which leaves little time for cycling, about 30 minutes to 2 hours a couple days a week.
Have missed cycling with my P.V. Bike Chicks friends, a local all women’s cycling club.  Considering time constraints, many times it’s easier to jump on my trainer at home to get a good hard workout in.  On days that I get outdoors, have been working towards attaining my goal, referring to the heat map on Strava.  It’s been interesting seeing all the little streets I never knew existed, meeting awesome homeowners along the way and seeing a variety of wildlife and horses. On two streets alone there were more than 40 peacocks and peahens.  Locals don’t particularly like them due to the loud noise they make and the awful mess they leave behind, but they are beautiful.
The most beautiful thing about riding my bicycle over Palos Verdes are the views of Catalina and the hills, all of San Pedro harbor, south to San Clemente and north to the Hollywood sign. From the other side of the hill Redondo Beach north to Point Dume and all of Los Angeles. Breathtaking!
What is your goal for the year? Is it big enough to excite you?  Is it small enough that you believe you will accomplish it before the year is out?  If you answered yes to both questions, the “it” is in the sweet spot and you will likely make it happen!  What happens if you attain your goal early in the year? Are you done, or do you expand your goal? Do you expand it like I did to other cities in the area?  What are your fitness goals in 2019?
– Kim M. White, Speaker, Holistic Healthcare Practitioner, Life Coach, Triathlon Coach, Personal Trainer.  Author of 365 Days to Abundant Health: The Little Steps to Help You Thrive