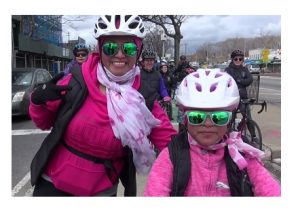 There was a chill in the air but that didn’t dampen the spirits of the ladies who answered the call to ride on Queens Boulevard in New York City.  It was an exhilarating experience cycling together in a large group, no doubt comforted by the thought that there is safety in numbers.  Their message was to bring attention to the fact that there is a gender gap and they are demanding there should be more protected bike lanes that would help greatly in making streets safer for women to ride bikes in the city.  Laura Shepard, Organizer for the 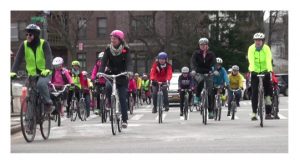 used her megaphone to remind the 370 participants about the rules of the road.  Enthusiastic cyclists relished their chance to take to the streets to make their voices heard.  It’s time there were more bike lanes, making streets safe for women to ride they would say.  “Fix Queens Boulevard” was their chant.  You can expect to see more of these enthusiastic ladies taking to the streets to ride in future.  Watch video highlights of the Queens Women’s Ride HERE.