“MAMIL” is a new Australian documentary directed by Eleanor Sharpe and Nickolas Bird.  MAMIL is also the acronym for “middle age men in Lycra.”  The movie reveals numerous stories of how and why these unlikely cyclists have come together.  One man interviewed for the movie trailer said, “We’re just weekend warriors trying to set our own best times and challenge each other.”  Watch movie trailer & purchase tickets HERE.

Does your man want to be a MAMIL?   A middle-age man is 45 to about 64 years of age.  Some men cannot cope with the thought they are middle-aged and do all sorts of things to convince themselves otherwise, also known as  “middle age crazies.”  No doubt you have heard accounts of men acting out inappropriately for their age.  MAMIL’s on the other hand face their mortality head on coping by participating in a low impact sport – cycling while improving their fitness level, mental health and physique.  No matter your man’s shape or size or your level of embarrassment he unabashedly pours himself into compression fitting Lycra and rides a bike along the highways and byways bonding with men his age.  You may have given him a dozen reasons why he shouldn’t participate but understand that he is feeding his DNA – to bond with the guy’s and enjoy a bit of competition.  Your man is choosing a healthy way to improve his mood and his fitness by not resigning himself to the status quo, sitting in front of the tv binge watching House of Cards episodes or playing computer games for hours on end.  Ladies, embrace your MAMIL and treat him with the love and respect you in turn want from him. 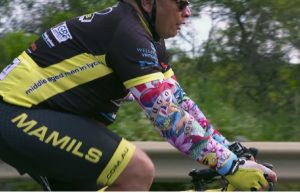 Out of the MAMIL movement has come the formation of MAMIL cycling clubs.  Some participate because of a medical diagnosis, e.g., cancer, MS, etc., or weight gain due to a sedentary lifestyle.  These men say of their MAMIL cycling experience, “There’s really no feeling like it.”  “This is the stress buster, this is your moving meditation.”  “This is about sharing an experience.”  Clearly MAMIL’s do not have the same hang-ups that most women have about exposing their lumps and bumps acquired with age.  They will never confront you by asking if their cycling jersey or shorts make them look fat.  Middle-age men in Lycra are bonding all over the U.K., Australia and U.S, enjoying the camaraderie of cycling with other men, competing for best times and getting fit.  They have discovered and in some cases re-discovered the joy of cycling.