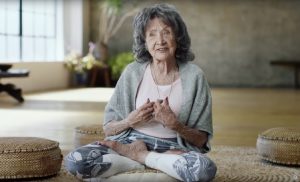 Tao Porchon-Lynch begins each day by saying, “This will be the best day of my life,” and adds that when you say this it will be so.  Clearly age is only a number with this soon to be centenarian who leads what would be considered by many half her age a very active lifestyle.  She speaks at 20 international conferences annually, hosts yoga retreats and teaches eight classes per week at the Westchester Institute of Yoga in New York, a business she founded.  Tao also competes in four ballroom dance events annually with her dance instructor and partner Anton Bilozorov who is seventy (70) years her junior.  Tao’s mantra and trademark, “There’s nothing that you cannot do.”  The proof of her dancing success lies in the many hundreds of first-place awards she and her dance partner have won for competitive dance, remarkable when you consider she first took up ballroom dancing at 87.  The more you know about this cosmopolitan woman the more you are inspired.  It’s no wonder so many people flock to be near her, she exudes positivity.  At age 93 Tao was recognized by Guinness World Records as the, “World’s Oldest Yoga Teacher”.   At 96 she received a standing ovation from judges and audience members of America’s Got Talent.  (Click HERE to watch video.) 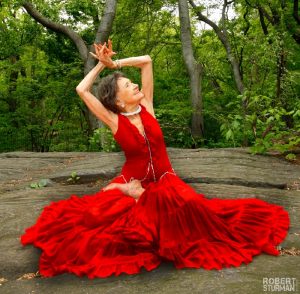 Born Andrée Porchon ( the addition of “Tao” came later) in 1918  in Pondicherry, India a french colony at that time, her first introduction to yoga was in 1926 at 8 years of age.  She watched as a few boys at the beach not much older than she were making what she called, “beautiful shapes.” Tao explained,  “I wanted to do the amazing things that they were doing with their bodies”, but her aunt told her, “That’s yoga. It’s un­ladylike.”  Tao replied,  “If boys can do it, so can I.”  Tao’s Uncle Vital Porchon was a great influence on her life from a young age.  He knew many of the great spiritual thinkers and activists of pre- Independence India.   She met her Uncles friend Mahatma Gandhi in their family home, he too left a lasting impact on her life.   In 1930 at age 12 she marched with her Uncle and Gandhi on two occasions.  Later she would March on Washington with Martin Luther King Jr. in 1963. (click HERE to watch video) 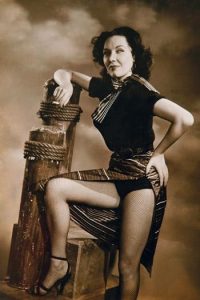 A lifelong peace activist,  a couture model in England, France and the US, modeling for top designers such as Coco Chanel and Jean Patou, Tao became a Hollywood actress in 1949 with MGM Studios, worked as an  international film broker, writer, producer, knew numerous celebrities befriending fellow actress Marilyn Monroe.  She taught yoga to famous Hollywood actors such as Clark Gable.  Tao helped many people during World War II to escape the Nazis as a French Resistance fighter.  In the 1950’s she trained under some of the most recognized names in yoga and Indian philosophy; B.K.S. Iyengar, K. Pattabhi Jois, Swami Prabhavananda and Maharishi Mahesh Yogi.   Dr. Deepak Chopra said of Tao: “One of the most acclaimed yoga teachers of our century, …..a mentor to me who embodies the spirit of yoga and is an example of Ageless Body, Timeless Mind.  Like yoga, she teaches us to let go and to have exquisite awareness in every moment.”

Tao married Bill Lynch, an insurance salesman in 1962.  She and Bill would ride their bikes on the Bronx River Parkway together when they lived in Hartsdale, New York in the 60’s.  Tao became widowed in 1982 never having children.  An oenophile she co-founded the American Wine Society and published a wine paper.  As an award-winning author of two books she received an IPPY Award and three International Book Awards in 2016.  In Tao’s autobiography Dancing Light, she describes her encounters with notables that even today only require singular name recognition; Gandhi, de Gaulle, Hemingway, Dietrich, Monroe, Hope, Crosby, Astaire, Backus, Skelton, Price, Tracy, Gable, Marceau, Taylor, Crawford, Chanel, Mondavi and the list goes on and on.   Is it any wonder that in November 2015 during an interview with ABC World News she was referred to as a “Real-Life Forrest Gump” having participated in countless historic events over nearly a century?

According to Tao,  “This life force is inside us, but 90 per cent of people rely on what others say, instead of feeling it.  Be in touch with the beauty of nature and oneness, and you will blossom.  Don’t think of age.  What you put in  your mind materializes.  Stay curious, and live every moment.”

On August 13, 2018 Tao Porchon-Lynch will have a milestone of a birthday to celebrate – 100 years of age, yet we’re certain she won’t be dwelling on her age.  Tao tells us,  “We don’t have to fade.  In my head, I’m still in my 20s, and I have no intention of ever growing up.“  Many of us cannot help but consider Tao’s age at every milestone of her life because she is so remarkable.  A vegetarian who drives a Smart car, loves high heeled shoes and enjoys meditation. She does not have one pretentious bone in her body and through her gentle spirit she continues to teach about a happier, healthier life if we can stop thinking about our age, focus on our breath which is the life force within us, remain positive in all we do and pay no attention to what others say to dissuade us, living every moment of our lives to the fullest.  Tao continues to live every day dedicated to pursuing her passion of positivity and  inspiring people everywhere.  Thank you Tao!