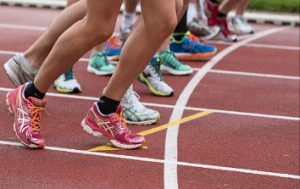 Relative Energy Deficiency in Sport or “Red-S” affects sportswomen and men who choose to severely restrict food intake in order to be lighter, faster and superior athletes at a perilous cost.  At first all seems well until the horror or consequences of a depleted diet takes its toll.   Anna Boniface, a physiotherapist and marathon runner from London, was forced from competition 10 miles into her international debut race in Toronto, Canada, due to a stress fracture of the ankle as well as a diagnosis of osteoporosis of the spine at age 25.

With high aspirations to win, blinded by a host of warning signs which included reduced hormone levels causing an 8 year hiatus from her period known as amenorrhea.  For many of us that wouldn’t seem a bad thing, however this would only be normal if she had not yet reached puberty, had been pregnant or breastfeeding or occurred after menopause.  Deterioration of bone density and mental health issues are also weighty symptoms of a severe diet restriction.  Even with a broken ankle she wanted to push on, but realized the futility of her injury.  Anna had a coach and a training schedule, yet single mindedness to excel and win at any cost caused her to ignore important warnings along the way.  Click HERE to learn more.