Red Bike Pic of the Day! 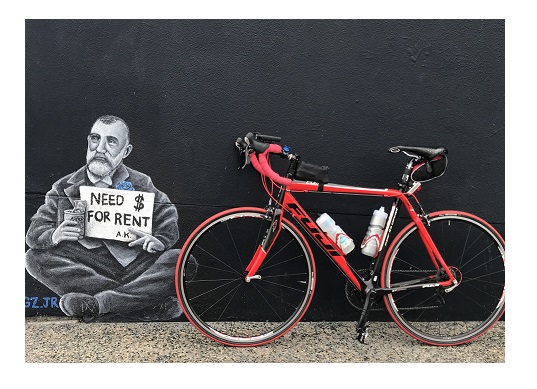 This Red Bike Pic of the day mural located in Venice, California entitled “Need $ For Rent” is a simple expression of an enormous multifaceted  problem in what was once called, “The “Golden State.” California’s homeless population faces exorbitant housing costs.  According to Forbes in 2018, the “typical Angeleno pays 41% of their income to pay rent.”  Based on the EIU’s, “Worldwide Cost of Living Survey List 2019″, Los Angeles ranked number one, “Most Expensive Cities To Live In”.

California’s homeless population suffers from a multitude of issues which many include drug addiction, alcoholism, hunger and mental illness with their numbers continuing to rise annually. The City of Los Angeles has dropped the phrase, “ending homelessness.” yet continue to throw taxpayer dollars at a problem that seems to them insurmountable.  Californians are told that hundreds of thousands of rental units are in high demand with many builders building luxury units.  Any wonder why finding a place for human beings with so many problems to overcome seems insurmountable?